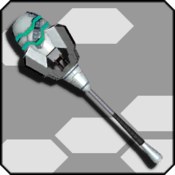 Wand
Originally there was no Photon Arts for Wands, but was implemented in the 2020/10/14 update.


Like the Wand's Normal Attack, it is a melee attack that scales off of Melee Power. Various skills that increases Melee Power can be utilized for this.

However, the (power increase) effect of Techter's skill "Wand Lovers" is not applicable.

The Wand PA does not cause a Tech Explosion.

The gauge of Fused Techniques can be accumulated even if the damage caused by the Wand PA is done.