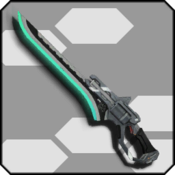 Gunblade
Being a versatile choice for any class, their PAs can consist one of the following: Melee only, Ranged only, and a mix of both Melee and Ranged. Many of their PAs are suited for medium to close range attacks, but cannot be canceled during their animations. They also have a fast travelling PA, a PA with derivative attacks, and a PA that can be held down.

As a side note, some of the PA names are or were derived from German.