Fighter ("Fi") class is a specialized melee class that focuses solely on raw power. It is capable of wielding extremely strong, but difficult to use Melee-based weaponry and is coupled with a Skill Tree that grants extremely powerful boons for landing Critical Hits and playing dangerously, making Fighters incredible powerhouses that live on the edge.

Reaching Level 75 on this class will give the following bonuses to the base stats of all classes and all characters of the same account: PP +2,

Short-range daggers that excel at aerial combat. Capable of extremely fast attacks with multiple hits, and multiple PAs that allow maneuvering in all directions, both horizontally and vertically. Twin Dagger attacks and PAs also have very brief frontal Perfect Guard frames, allowing continuous offensive play if timed right. However, because PAs are so fast, it tends to also consume PP much faster than most other weapons. Twin Daggers can be powered up with the Skill Twin Daggers Focus, which grants them a damage bonus for staying airborne and performing multiple midair "jumps".

Twin Daggers' Weapon Action is Spin. Pressing the Weapon Action button will cause the player to spin in the air. This counts as a jump for Twin Daggers Focus, deals minor damage at point-blank range, and blocks attacks with Perfect Guard frames.

Short-range bladed weapons that are capable of dishing out a multitude of hits in a single combo. Double Saber PAs generally have multiple hits (but slower than Twin Daggers), and are capable of drawing enemies nearby with area of effect attacks. Focus management is a very important part of using Double Sabers. Double Sabers can be powered up with the Skill Double Saber Focus to execute their Weapon Action.

Double Saber's Weapon Action is Whirlwind. When activated with the Weapon Action button, the wielder flourishes the weapon in the air. When used in tandem with Double Saber Focus, using it while at least one Focus Level is stocked will deplete your Focus Gauge and summon a whirlwind around you that deals repeated damage to enemies close to you. This whirlwind can be stacked up to two times. The more Focus is consumed upon activation, the more damage the whirlwind deals and the longer the duration.

A twin pair of weaponized gauntlets. Knuckles possess notoriously short range, but exceed even Swords in power to compensate. Their Photon Arts can hit extremely hard if given the opportunity, and are a powerful weapon when engaging a target one-on-one. Knuckles can be powered up with the Skill Knuckles Focus, which grants its user a power boost as long as the user continues a combo.

Knuckles' Weapon Action is Sway. Pressing the Weapon Action button will cause the wielder to swiftly duck in place. This gives brief invulnerability and does not break combos for the purpose of Tech Arts and Knuckles Gear. 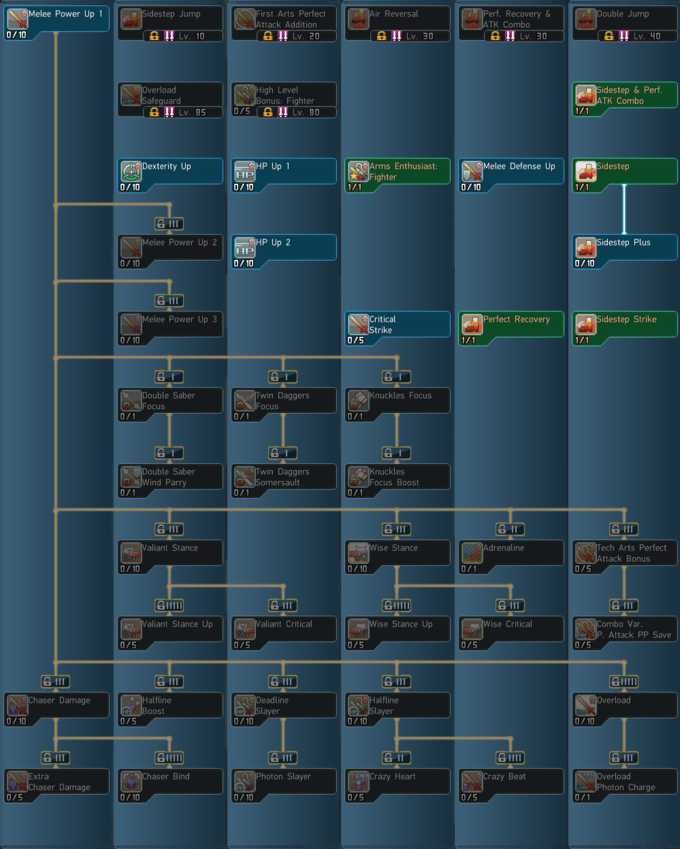 Focus Skill. Hitting enemies with basic attacks or PAs will generate Focus. The more hits, the faster it fills.

Focus Skill. Focus accumulates depending on the number of jumps in the air. PA Power increases based on Focus gauge level.

Focus Skill. Focus accumulates depending on the number of consecutive attacks. Attack speed increases based on Focus gauge level.

Passive Stance Skill. Increases the damage done to enemies from the front.

Further increases the effectiveness of Valiant Stance while attacking enemies from the front.

Increases your critical hit chance while under the effects of Valiant Stance.

Active Stance Skill. Increases the damage done to enemies from the back. Overwrites the effects of Valiant Stance while active.

Further increases the effectiveness of Wise Stance while attacking enemies from the back.

Increases your critical hit chance while under the effects of Wise Stance.

Main Class Only. Grants a temporary damage bonus to your Melee Potency and reduces your Max HP.

Main Class Only. Completely restores your PP after Overload wears off.

Increases the effect duration of each Shifta or Deband you receive.

Grants a damage bonus when you perform a Perfect Attack while stringing together different Photon Arts and Techniques.

Reduces your PP consumption when you perform a Perfect Attack while stringing together different Photon Arts and Techniques.

Grants a damage bonus when performing a Melee attack on an enemy that is affected by a status ailment.

Grants a damage bonus when performing an attack on an enemy that is affected by a status ailment.

Grants a chance of triggering a bind state when performing a Melee attack on an enemy that is affected by a status ailment.

Boosts the chance of inflicting status ailments when your HP falls below 50%.

Technique Power when your HP falls below 25%.

Technique Power when your PP falls below 50%.

Technique Power when your HP falls below 50%.

Boosts automatic PP Recovery as well as PP recovery following an attack while you have a status ailment.

Melee Power while you have a status ailment.

Main Class Only. Cancels an active Overload and sets your HP to 1 if you take damage that would incapacitate you. Cooldown extended with each use.