This page contains spoilers, you have been warned!

Dark Blast is a Skill that allows the player to unleash dark power and assume a Falspawn-like form, granting them exceeding combat prowess and insurmountable power. 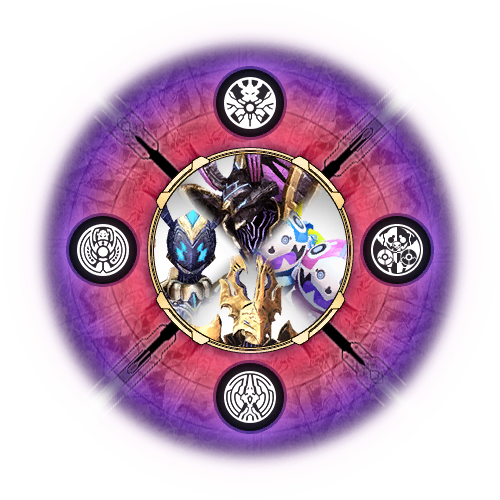 In a moment of grave crisis, Schreger has possessed Melfonseana with the power of Ephemera and struck down both Gettemhult and the player. When Schreger moves in for the killing blow against the player, Gettemhult suddenly steps in and takes the hit, absorbing a critical wound from Melfonseana's Twin Daggers. Despite his grave injury, Gettemhult refuses to go down easily, and decides to use what is left of his power and transfer it to the player. Upon doing so, the player absorbs the record of Gettemhult from the Oracle universe, who recounts his past with the player before bestowing to them the power of Dark Falz [Elder]. Using their newfound strength, the player unleashes a power that transforms them into a Falspawn-like humanoid being, and proceeds to engage Schreger in combat with the support of Gettemhult and Melfonseana. Schreger, despite his overwhelming strength in his Omega Hyunal form, is quickly defeated by the player's Dark Blast, and dissipates from Melfonseana's body.

After resorting to an Ephemera Flower to shatter the Crimson Fellwyrm's protection, Luther's mind starts being corroded by the Ephemera's after effects. At first it seemed like simple exhaustion from employing so much strength in the deed, but one night Luther takes over and kidnaps Hariette, flying away on his new dark wings. After tracking down Luther to a hidden cave shown to the player via memories of Luther's past, it is revealed that Luther was attempting to use Hariette as a vessel to revive Xion. After being found, Luther becomes angry at the sight of the player, as ARKS foils his plans for a second time. Here, Luther remembers his identity fully and takes on the form of Omega Angel to deal with the player once and for all. The battle rages on as Luther summons Avian Falspawn to fight for him. As the player clashes with one of Luther's minions, Hariette resolves herself to vanquish Luther as an enemy of her kingdom. One last shred of Luther's past self surfaces to accept the killing blow. Now dying on the arms of Hariette, Luther pleads the player to protect his beloved sister and grants them the power of Dark Falz [Luther].

Having (sometimes awkwardly) defeated the Emissaries of Apprentice the Vernal, the player and their group finally reach the capital city of the Kingdom of Epyk. Escorting Margareta to her home temple, they are greeted by Margareta's high priest who, after being called out for his schemes, decides to drop the formalities and reveals himself as the mastermind behind the recent events: Elmir. Unimpressed, Margareta uses her power as Holy Queen to seemingly get rid of Elmir. During a moment of assumed safety, Elmir tricks Margareta into a trap, infusing her with Ephemera Energy. Apprentice takes over, but not before Margareta dismisses Euclyta and Aurora, who were tagging along with the player after being freed from Apprentice's control, back home from their summons. A rather humorous exchange between Margareta and Apprentice ensues within the former's conscience, conveniently visible on a nearby mirror's reflection, where she despairs at how slutty Apprentice's overall appearance is. Margareta then pleads the player to finish off Apprentice before she dies of embarrassment. Having enough of the tomfoolery, Apprentice assumes her Appregina Omega form to do battle against the player. Through the combined might of the player and Hariette, Apprentice is defeated. Just as she is, the Falspawn energy within her reaches critical mass, threatening to go out of control right there. Hariette thinks quickly and employs Luther's technique to siphon some of the energy off, giving the player an opening to close in and enter Margareta's conscience. There, the player finds Margareta further quarreling with Apprentice, now with her true aspect before she was made a Dark Falz host. After interrupting the two to remind them of the urgency of the situation, Margareta and Apprentice have a heartfelt moment before the former returns to the real world. After this, Apprentice herself exchanges a few more words with the player before they depart too, now bearing the power of Dark Falz [Apprentice]. At a later time, during an argument with Luther within the player's conscience, it is revealed that Apprentice's real name is in fact "Margareta".

Arriving at the Ys Artia Capital, the player, Xiera and Clarissa find a veritable ghost town, all the citizens having been killed and devoured by Gemini. As they enter the Capital's inner sanctum, they find Florent innocently playing in the center of the room. He welcomes the player and congratulates Clarissa in bringing him new playmates that won't break as easily, revealing that the "Clarissa" that accompanied them was just a copy made manifest by Gemini's power, the original already long dead and consumed. Florent exhibits his new powers by creating more copies of not only Clarissa but also of the townspeople he ate. Joyous at how he can now have all the playmates he wants, he assumes his Omega Dranble form to fight the player. Battling through seemingly endless waves of Falspawn, the player manages to get the upper hand against Gemini. But no matter how much he's attacked, Gemini shows no signs of stopping, appearing to have a seemingly endless supply of power. Delighted at the fun he's having, Gemini eggs on the player to fight more. The player asks Gemini to stop, as there is really no reason to fight. But from Gemini's perspective, there is no need of a reason to fight and have fun. He finally has what he craved most: freedom, company, friends. Always resenting the loneliness he was made to suffer through, he now wanted to make the most of all the happiness he was always denied. Somehow, Clarissa appears once more, donning her Photoner garb, apologizing to Florent for the heartless experiments she had put him through for the Photoner's curiosity of his powers and asks the player to save Florent. Cradled in Clarissa's motherly embrace, Florent allows himself to be slain by the player. Within Florent's conscience, Florent is saddened at how he was made to recall memories he'd rather stay forgotten. He reveals how his mind was split into two personalities: the boy Florent and the girl Fleur. Neither really knows who's the original, considering it a pointless effort. As they reminisce the long time they've existed and all that they've been through, they entrust the player with the power of Dark Falz [Gemini].

But something was different this time. As the player acquires the power of a 4th Falz, a vision of Persona flashes before their eyes, making the player faint. They are then awakened by a worried Xiera, dazed and confused as to what that vision could portent.

Each Dark Blast form can be unlocked in one of two ways:

Once Dark Blast is unlocked, it becomes available to all characters on the given account. Dark Blast Exp is shared between characters of the same account, but acquired skills will be specific to the character.

Once unlocked, Dark Blast can be installed to the subpalette.

Dark Blast has a default duration of 60 seconds and can only be used once per Quest. If your HP drops to 0 while in Dark Blast, you will be forced out of the transformation prematurely.

You can regain the use of a Dark Blast if you complete an E-Trial containing Dark Emperappy, Imperial Fiendmage, or Imperial Fiendlancer.

To activate Dark Blast, the player must charge the Dark Blast Focus by inflicting damage and defeating enemies, in similar vein to a Photon Blast or Fused Technique. This Focus has properties different than those however.

Note that the EXP is accumulated individually for each form.

* In Bewitched Woods, the enemies Kingdom is determined by the Crest that appears when it spawns.

Basic stats are fixed for each character level / transformation type.

Using Dark Blast EXP will allow you to learn skills corresponding to each form. Every skill that can be learned/unlocked are managed on a per character basis. Skills that require certain conditions to be unlocked are separate for each character as well. Skills that require no EXP are not automatically acquired when unlocking them, so it is recommended to manually learn these skills after unlocking. Learning and upgrading skills cannot be done during quests (including inside the Gateway Ship after clearing). Dark Blast skills can also be reset for free by selecting the "Reset Skills" option in the Dark Blast menu (unlocked skills are retained after resetting).

All of the skills are only applicable during the transformation. In addition, since there is no limit to the total number of skills that can be learned, it is possible to max out every skill for each form.