Wielding three types of weapons, the Étoile (Et) is a unique Scion Class distinguished by its melee-oriented focus, with access to three types of melee weapons with a wide range of capabilities. Its outstanding bulk and survivability makes Étoile a fantastic front-line fighter, and with its unique party support options, an Étoile is a must-have in any party.

Unlike other classes, Étoile does not provide base stat bonuses when reaching Lv.75.

As a Scion Class, the Étoile Class has several properties not shared by Normal Classes.

The Étoile uses the

Étoile's Double Saber is a master of mobile arts, with a variety of short ranged and long ranged attacks at its disposal. With this, it can keep up with even the most flighty targets and unleash large amounts of damage with ease.

Étoile's Soaring Blades are a slower, primarily short-ranged weapon ideal for taking on targets in close range. What it lacks in range and speed, it makes up for in sheer power and burst, able to inflict massive amounts of damage with its unique set of abilities.

Étoile's Wand is a jack-of-all-trades, boasting an extremely versatile kit unlike any other weapon. Its Photon Arts can adapt to a wide range of combat situations, and no damage output is sacrificed in the process. With access to Focus PAs, Wand has the ability to output immense damage on targets at the cost of range.

During Photon Arts, pressing the Weapon Action button when a white circle appears will activate Focused PA, performing an alternative version of that PA with shorter range and enhanced damage output. 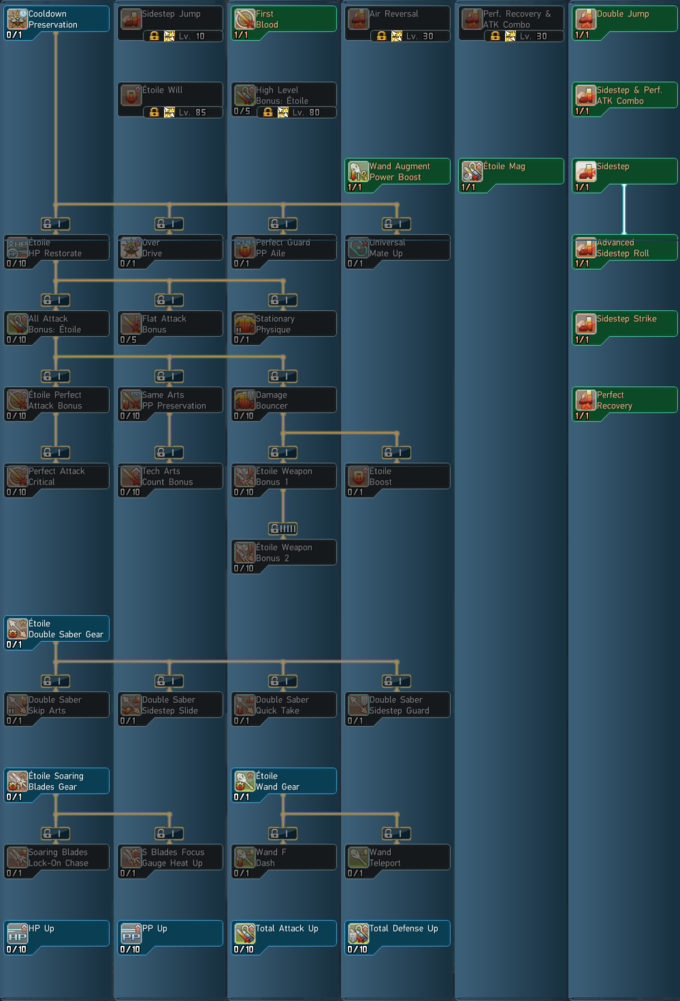 Focus Skill. Main Class Only. Uses Focus and reduces damage taken while attacked. Use Focus by holding Normal Attack to do an enhanced attack.

Main Class Only. While a Double Saber is equipped, skip the first half of a PA by activating it without any directional input.

Main Class Only. While a Double Saber is equipped, using Sidestep again during Sidestep will allow you to Slide in a fixed motion.

Main Class Only. While a Double Saber is equipped, quickly approach the enemy by pressing the Weapon Action or Normal Attack button during a certain time frame.

Main Class Only. While a Double Saber is equipped, successfully evading launches a counterattack to locked on enemies when you Sidestep forward.

Focus Skill. Main Class Only. Uses Focus to activate a Connect. Activate a Full Connect by using the entire gauge.

Main Class Only. While Soaring Blades are equipped, Normal Attacks will advance you towards a locked-on enemy.

Main Class Only. While Soaring Blades are equipped, using Connect or Full Connect will boost Focus Gauge accumulation for a certain period of time.

Focus Skill. Main Class Only. Hold down the Weapon Action to use Focus and enable an extended Perfect Guard. Perform powerful attacks each time Focus is used.

Main Class Only. While a Wand is equipped, during a Focused PA, movement speed is increased for a short time during a combo.

Main Class Only. While a Wand is equipped, hold and release the Weapon Action to warp in a direction and attack.

Main Class Only. Increases your potency when a

Soaring Blades, or a

Main Class Only. Reduces the cooldown of Active Skills from non-Étoile Party Members in the area.

Active Skill. Main Class Only. Activate to recover the HP/PP of your Party Members and increase their Maximum PP for short time.

Main Class Only. A successful Perfect Guard will restore a certain amount of PP for all Party Members in the area.

Main Class Only. Increases the HP recovery amount and adds PP recovery when Party Members in the area use Recovery items.

Default Skill. Main Class Only. While a Wand is equipped, change the highest attack stat of Melee & Technique Augments on the weapon.

Gain a damage bonus to your PAs and Normal Attacks when you miss a Perfect Attack.

Reduces the amount of PP consumed when a PA is used consecutively during a combo. PP reduction is limited to a certain rate.

Gain a damage bonus and reduce PP Consumption when you use different PAs continuously during a combo.

Significantly reduces damage taken. Reduces the amount of HP you heal from everything not Consumables, Objects & Étoile Skills.

Reduces damage taken every time you get hit. Reduction rate decreases over time.

Main Class Only. When suffering damage that would have incapacitated you, become invulnerable for a short time, recover all HP/PP, and restore Focus. One per Quest