Summoner ("Su") is a class that fights by summoning

Pets. While their fighting style is vastly different from that of other, more conventional classes, they have access to a wide range of options through their Pets; combined with a Skill Tree that promotes ease of use and Pet support, a Summoner is capable of handling nearly any battlefield situation with ease.

Reaching Level 75 on this class will give the following bonuses to the base stats of all classes and all characters of the same account: +10 HP,

Summoners use an unique weapon:

A small baton used to control Pets. Unlike most other weapons, Harmonizers bear several unique properties. Harmonizers are largely useless as actual weapons, only capable of inflicting a pitifully weak Melee attack in point-blank range that restores no PP. Instead, Pets are bound to Harmonizers and are summoned while your Harmonizer is out. Pets take the place of weaponry for Summoner, armed with their own Photon Arts and attacks as well.

Summoner is capable of binding Pets, creatures that the Summoner commands to battle, to their Takts as their primary method of combat. for damage calculation the ATK stat use is both summoner and active Pet combine. the ATK used is TEC Power by default, but can switch to RNG Power or MEL Power using skill, however, the damage result is always count as Tech.

Jinga
A wolf/dog-like Pet that specializes in area-of-effect damage. Has high stats overall and capable of taking down large crowds of enemies in short time. Their main appeal is their utility with knockdown, stun, damage-over-time, and wide area Photon Arts. A Wanda can evolve to Jinga if the proper Egg is acquired. Jinga Assault will become more powerful, with wider range, allowing it to be used as a low-cost Trim Slam.

Aero
A falcon-like Pet that specializes in single target combat. Has significantly lower HP than other Pets, making it rather fragile. Their main appeal is their high-powered Photon Arts and overall ease of use. A Trim can evolve to an Aero if the proper Egg is acquired. Aero Spiral will become more powerful with increased power and range.

Popple
A Pet that specializes in ranged attack and support. Stays next to the player and have respectable defense. Their main appeal is their long-range Photon Arts that has a variety of functions, that is knockdown homing attack, area damage-over-time, weakening an enemy's attack, and a small area suction. A Sally can evolve to a Popple if the proper Egg is acquired. Popple Plode will become more powerful as it is chargeable and hits a wider area.

Marron
A Pet centered around self-destruction. Compared to Melon, Marron has a significantly higher HP but lower defenses. Their main appeal is their ludicrously powerful self-destruct attack, which can be powered up by letting them take hit until they become big, blinking, with flames spewing from them. Marron also has utility Photon Arts, that is a high accuracy homing attack, a powerful damage-over-time, and shielding. Their area-of-attacks are rudimentary, however.

Melon
A Pet centered around self-destruction. Compared to Marron, Melon has higher defenses but significantly lower HP. Its self-destruct attack is similar to Marron, but can be thrown repeatedly, much like throwing a yo-yo. Only when the throwing stops, will they die.

Viola
A purple poodle-like Pet specialized in taking heat. Their stat is comparable to a Wanda, with lower defense. Their Photon Arts is very similar to a Wanda, but Viola has a shorter area attack. Their main appeal is their increased PP gain from normal attacks, form change, which increases their ability to draw enemy attention and significantly increase the damage of their other Photon Arts. However, PP regeneration will be a lot slower, as will their Photon Arts animation.

Vulcan
A humanoid fox-like Pet specialized in efficiency. Their Photon Arts are PP efficient close-range attacks, with only one Photon Attack acts as an approach. Despite this, Synchro is one of the least defensive. Their main appeal is their of method of chaining Photon Arts that will cause them to build up power for Strike. A common tactic is using two alternating attacks until the player glows, indicating a maximum power for Strike. However, player cannot move while doing a combo or else the combo might break.
Vulcan is the evolved version of Synchro that boasts more bulk but has the caveat of significantly less DEX than its counterpart. In addition, Vulcan Strike can potentially deal more damage than its counterpart.

Herbie
A small dragon-like Pet specialized in ranged damage and multi-target enemies. They have a very low defense stat, but among the highest attack. Their Photon Arts are mostly ranged attack with different usage, that is homing focused attack, homing multi-target attack, area damage-over-time, a small area suction, and an extremely efficient close-ranged knockdown attack. Although counterintuitive, the knockdown attack Slash is the recall skill.
Herbie is the evolved version of Redran that trades slightly less overall stats for more DEX than its counterpart.

Rappy
A Rappy Pet. A well-rounded Pet that covers multiple bases with its plethora of attack and support-based Photon Arts. 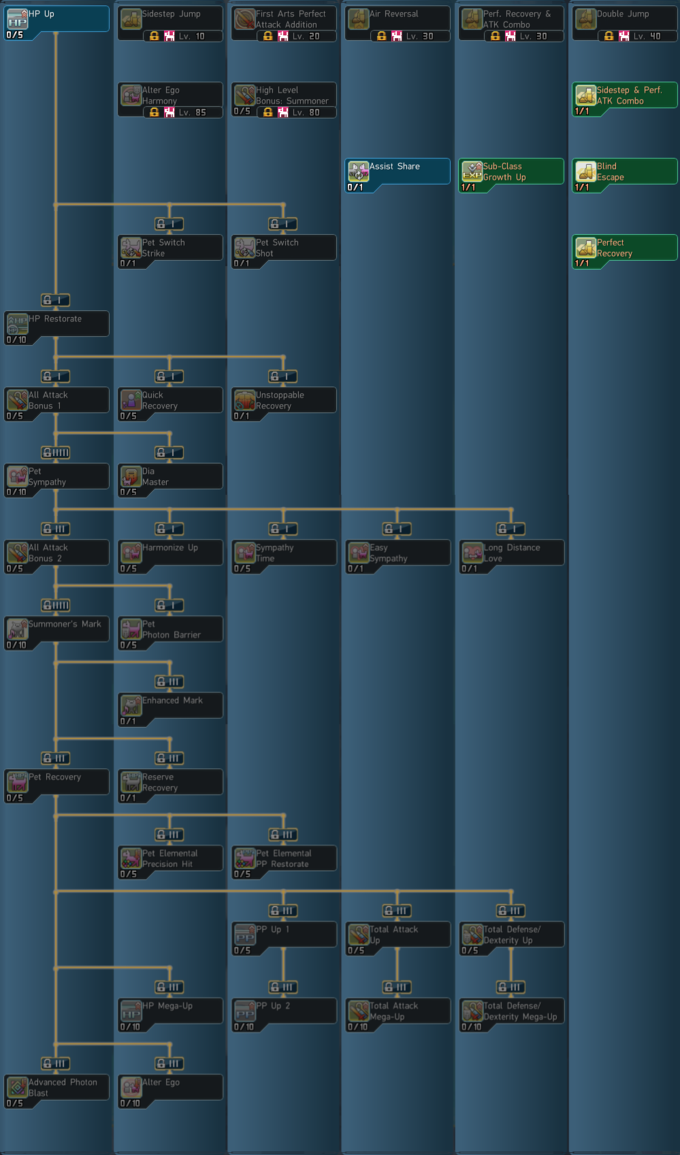 Default Skill. Main Class Only. Grants a double bonus to EXP earned by your selected Sub-Class during a quest.

Main Class Only. When you switch pets, allows the pet you switch to inherit Pet Sympathy effects, as well as other effects such as Shifta and Deband.

Active Skill. Main Class Only. Converts your pet's attacks so that they're carried out with Melee/Ranged Power.

Main Class Only. Boosts pet recovery and damage dealt for a set time when you respond to a request by your pet for Shifta or Resta.

Main Class Only. Adds a chance of incapacitating damage being taken by your pet instead. A period of invulnerability occurs after activation.

Main Class Only. Extends the receptive period of [#psympathy|Pet Sympathy]].

Main Class Only. Allows Shifta and Resta requested by your Pet to remain in effect even when your Pet leaves your side.

Main Class Only. Gives a set probability of neutralizing damage sustained by a Pet.

Main Class Only. Boosts PP Recovery when a pet hits the enemy with a Normal Attack that exploits the latter's Elemental Weakness.

Active Skill. Main Class Only. Grants a damage bonus for a set time in exchange for the player also taking damage whenever a Pet takes damage.

Causes you to recover HP gradually when your HP falls below a certain threshold.

Grants a bonus to damage dealt by the player and pets.

Reduces the duration of your Jellen, Blight Rounds, and status ailments.

Eliminates recoil and reduces damage taken when you use a Recovery Item.

Active Skill. Confers a marker that increases the damage dealt to enemies by you and your Pet.

Boosts damage you deal to any area of an enemy that has a Summoner's Mark attached.

Boosts the rate of recovery of Pets that aren't equipped and are included in the Weapon Palette.

Main Class Only. Damage is reduced and status ailments are neutralized while your pet is deployed and Alter Ego is active.