Braver ("Br") class is a hybrid class that specializes in short range Melee combat and long Ranged combat. Bravers have the option to hone their timing and precision for greater play.

Katanas are short-ranged melee weapons that strike a delicate balance between versatility and elegance. Katana has a PA for every situation and uses them with spectacular coolness that captivates the hearts of both allies and enemies. While the Katana's power is overall average, it can string together easy combos that grant it a damage-per-second ratio rivaling the Hunter's Swords. Katana rewards players for precision and timing with its unique mechanic of Just Charge, which is present in several Katana PA's and increases their power if they are charged and released at the right moment. Despite being versatile, Katanas have practically no long-range capabilities without exposing oneself to danger. Katanas can be powered up with the Skill Katana Focus, which, following a successful Perfect Guard, will envelop the wielder in an aura that boosts their MEL and Critical Hit Rate.

If the Katana is the heated coolness of the Braver, the Bow is its cold majesty. Complementing perfectly the Katana's close-range potential, the Bow offers great long-range coverage. Contrary to the Katana, the Bow's attacks are generally not as extravagant, shooting cold, unfeeling arrows with a solidified intent to kill. The Bow's accuracy is also dependant on stability: standing still will allow its arrows to hit more consistently their target while running-&-gunning will result in more than a few missed shots. Some of the Bow's PA's also require and enable followups and setups by combining different PA's into an excedingly high single-target damage burst. Despite some of its PA's actually being Melee Attacks instead of Ranged, the Bow does quite poorly in close quarters combat or against multiple targets. 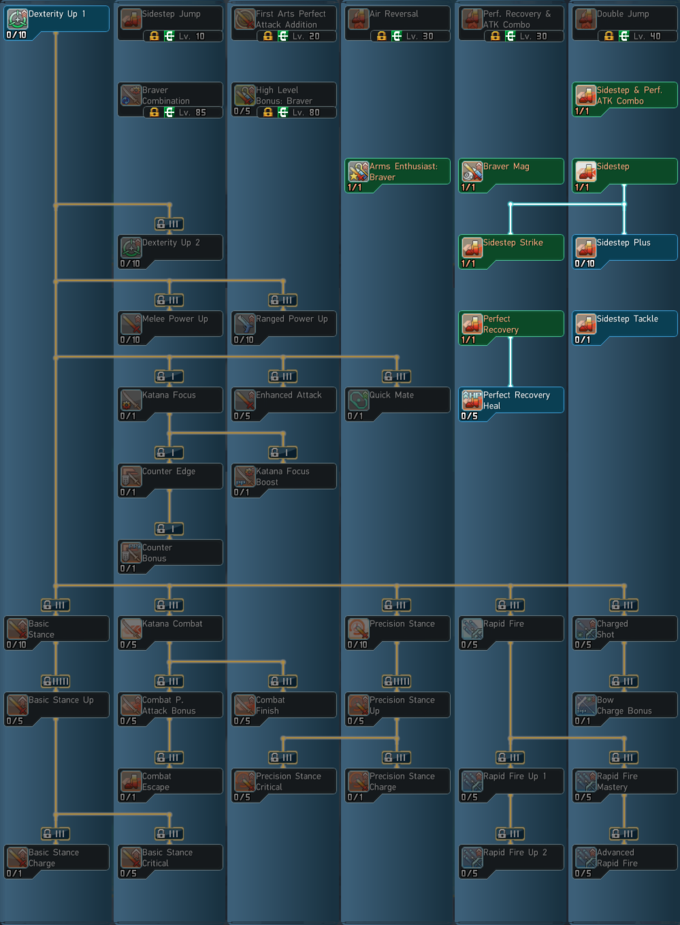 Katana Skill. Main Class Only.' Grants a potency bonus and recovers PP when a counter or Counter Edge is performed.

Katana Skill. Active Skill. Move at high speed and make slashing attacks on nearby enemies for a set time. Press the skill icon again to unleash a finishing blow.

Katana Skill. Main Class Only. Triggers a period of invulnerability when you initate Katana Combat.

Bow Skill. Boosts the potency and round velocity of charged Normal Attacks while a Bow is equipped.

Bow Skill. Main Class Only. Reduces your PP consumption and charge time for charged Photon Arts performed while a Bow is equipped.

Bow Skill. Boosts your Ranged Power when a Bow is equipped while in Rapid Fire Mode.

Bow Skill. Grants a damage bonus when a Bow is equipped during Rapid Fire.

Grants a damage bonus to attacks performed during Basic Stance.

Boosts the damage of charged attacks performed while in Basic Stance.

Boosts your critical hit rate while in Basic Stance.

Boosts your critical hit rate of attacks that are effective while in Precision Stance.

Boosts the potency of Normal Attacks.

Enables accerlated use of "-mate" items

Default Skill. Adds a set percentage of an equipped Mag's

Allows you to inflict melee damage while performing a Sidestep. Doesn't apply to Blinding Sidestep.

Recovers HP when a Perfect Recovery is activated.

Main Class Only. Critical Rate boosted when equipped with a Katana or Photon Bow. Active Focus Gauge is maintained when switching between Katana and Photon Bow.