Wielding three types of weapons, the Phantom (Ph) is a unique Scion Class that helps supports allies by inflicting foes with Jellen. Using Shift PA's the Phantom class is able to decide which is best suited for the situation.

Unlike other classes, Phantom does not provide base stat bonuses when reaching Lv.75.

As a Scion Class, the Phantom Class has several properties not shared by Normal Classes.

The Phantom uses the

With Phantom, Katana reaches levels of extravagance and style that far outrank even Braver. Using the Katana, the Phantom will almost always be up close and personal with the enemy, dancing through and around them with a macabre waltz of bladed death.The Phantom Katana's PA's deal high damage and have brief periods of invincibility, allowing the Phantom to always keep the pressure on enemies via skills like Quick Cut. The Katana's relentless attacks and quick movements are ideal for accumulating Phantom Markers on a single target.

When used to activate Phantom Time Finish, the user will calmly brandish their Katana in a serene strike that viciously demolishes everything in front of them.

Katana Action allows the user to swiftly strike with the Katana's sheathe, emitting a mid-ranged slash. When charged, the user executes a rapid heavy slash with the Katana, detonating Markers on any target it comes into contact with. Unique to Katana, Weapon Action can be augmented with the Class Skill Quick Cut to warp between foes in an instant between attacks, allowing Katana to cover ground and keep the pressure on multiple targets simultaneously.

Phantom takes the Assault Rifle and combines it with its own powers to vastly increase its damage and versatility beyond what a Ranger could accomplish. Utilizing the Assault Rifle in combination with Phantom's own Photon Bits, they can control the battlefield with automatic turrets and land mines while keeping at a comfortable distance to snipe enemies from afar. Many of the Phantom's Rifle PA's allow for quick fluid movement, evading incoming damage while keeping on the offensive.

When used to activate Phantom Time Finish, the user will deploy an array of Photon Bits that ricochet their shots all around the area in front of them before finishing the enemy off with a massive, powered blast forward.

Rifle Action summons an array of Bits that seek out the nearest target, inflicting damage. When charged, the user deploys Bits to unleash a blast of energy that detonates Markers on any target it hits. With the power of the Bull's-eye Class Skill, the Rifle can gain a boost to Marker Accumulation after detonating a Marker, accelerating Marker build and giving the player a route to constant damage.

Any Phantom will argue that they use "Scythes" and not Rods. Nevertheless, a Rod in Phantom's hands will acquire unique PA's that grant a mobility and control that Force could only dream of. Even without a Rod readily available, Phantom can bolster their Techniques with skills like Stealth Tech Charge to stay active and mobile even while casting all manner of devastating Techs.

When used to activate Phantom Time Finish, the user will float menacingly as pillars of energy piece all enemies in front of them, finishing off with an eerie flourish of the Rod and a massive energy blast from above.

Rod Action causes the user to fire a bullet of Photon energy from their Rod, inflicting damage to the first target it hits. When charged, the user executes a wide-reaching slash that detonates Markers on any target it strikes. 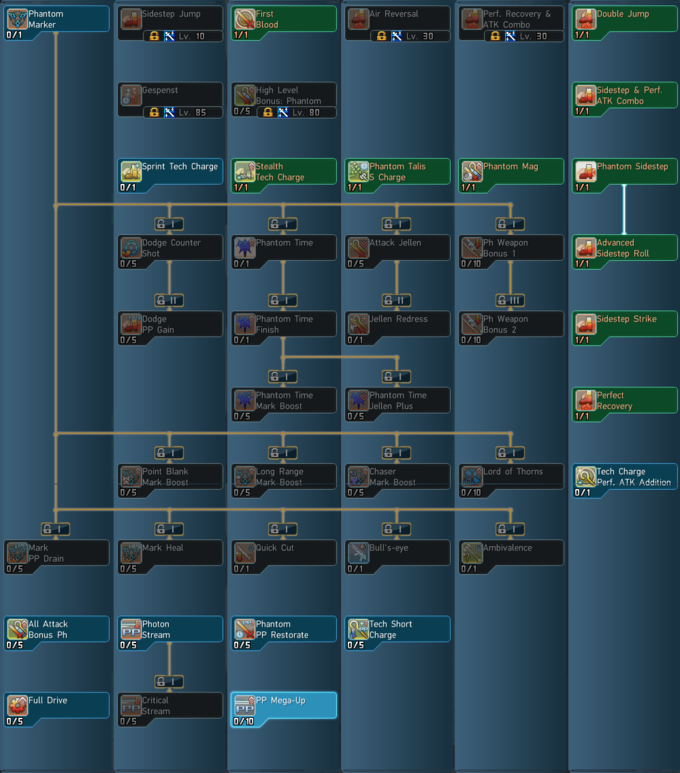 Main Class Only. While attacking with Phantom weapons, markers are accumulated on enemies & can be detonated using Weapon Action.

Main Class Only. Recovers PP when you've accumulated the max amount of markers.

Main Class Only. Recovers HP when you've accumulated the max amount of markers.

Main Class Only. While using a Katana, using the Weapon Action at a specific time will change its behavior.

Main Class Only. While using a Rifle, detonating a Marker increases Marker Accumulation.

Main Class Only. While using a Rod, increases Marker Accumulation and Focus while using Techniques.

Main Class Only. Boosts the increment by which your Marker Accumulation increases when you attack a nearby enemy.

Main Class Only. Boosts the increment by which your Marker Accumulation increases when you attack a faraway enemy.

Main Class Only. Boosts the increment by which your Marker Accumulation increases when you attack an enemy suffering from Status Ailments or Jellen.

Main Class Only. Active Skill. Consumes 50% of Focus to become invulnerable for 5 seconds upon activation. For a certain amount of time, extend the invulnerability duration of your Sidestep and reduce PP Consumption by 20%. When learned, Phantom Focus is enabled.

Allows you to perform a Phantom Time Finish when you press the skill icon again during Phantom Time.

Main Class Only. Boosts the increment by which your Marker Accumulation increases when you attack an enemy during Phantom Time.

Main Class Only. Inflict Jellen at a certain rate when you attack an enemy during Phantom Time.

Main Class Only. Increases your potency when a

Main Class Only. Activates when you perform an attack after evading an enemy's attack using Sidestep.

Main Class Only. Inflict Jellen at a certain rate when you attack an enemy.

Main Class Only. Strengthens Jellen when you attack an enemy afflicted by Jellen.

Default Skill. Main Class Only. When equipped with a Phantom weapon, for a limited time, become invulnerable and your movement speed increases when charging a Technique.

Default Skill. Main Class Only. Reduces the Charge Time of Techniques that was activated from the thrown Talis while using Eisenflügel.

Increases damage based on your max PP.

Increases Critical Rate and Critical Damage based on your max PP.

Main Class Only. Reduce damage taken when at 50% or lower HP and nullify status ailments. Goes into cooldown after activation.