The Gunner ("Gu") class is a specialized Ranged class that focuses on single-target combat and burst damage. Armed with their primary weapon, the Twin Machine Guns, and a Skill Tree that rewards close combat and skilled play and use of mobility, the Gunner is difficult to master, but has the capability to shine and exceeds the limits when used to its fullest.

Extremely versatile ranged weapons that serves as the primary weapon of

Gunners. They deal relatively small amounts of damage. However, they make up for it with the number of hits that they can deal in a given amount of time. While TMGs are considered as a Ranged weapon, their hit range is of Medium to Point-Blank range. Twin Machine Guns can be powered up with the use of the Skill Twin Machine Guns Focus, which grants them a damage bonus as they stay on the offensive and avoid taking damage.

A heavy-duty rifle loaded with bullets. Possesses a high rate of attack as well as extreme precision. Its Photon Arts augment its abilities, enabling it to adapt to many battlefield situations. Rifles can be further strengthened with the use of Ranger's Round Skills, which allow the user to load in special magazines that give their attacks special properties. 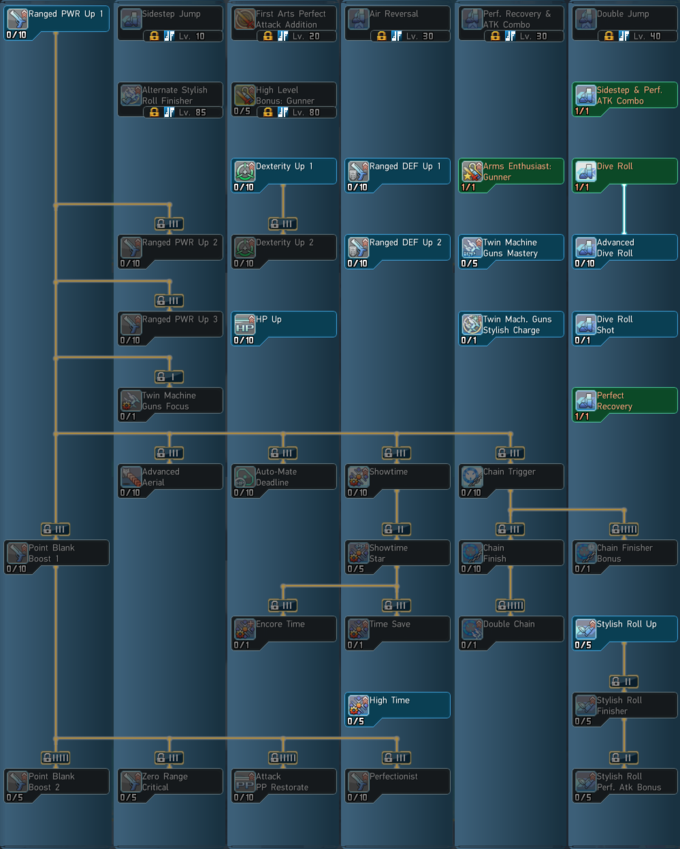 Focus Skill. Charges your Focus Gauge and boosts attack potency when you successfully land an attack.

Twin Machine Guns Skill. Re-activates Showtime one time only if you take no damage for the entire duration of a Showtime effect.

Twin Machine Guns Skill. Consumes PP to unleash a potent attack if you launch it with the PA button while performing Stylish Roll.

Twin Machine Guns Skill. Main Class Only. Gradually boosts your potency using Showtime. Resets when you take damage corresponding to a set percentage of your HP over a short period of time.

Active Skill Starts a chain when you score a hit with a Normal Attack following Skill Activation.

Reduces the cooldown time of the Chain Trigger according to chain length when a Chain Finisher Boost is activated.

Boosts the damage you deal when you hit an enemy in the air with an attack.

Automatically uses a "-mate item when your HP falls below 25%.

Boosts damage dealt when you hit an enemy with a Ranged Attack at close range.

Boosts your critical rate when you hit an enemy with a ranged attack at close range.

Boosts PP Recovery when you hit an enemy with a Normal Attack.

Increases the damage you deal to enemies when your HP is 75% or greater.

Default Skill. Press the Dodge key to do a fast dodge roll that has invincibility. Can be used in any direction.

Allows you to attack immediately after Dive Roll.

Jumping right after doing a Dive Roll in forward motion will transition you into running speed.