Force ("Fo") class is a standard Tech class. The Force is capable of wielding powerful magic-like abilities known as Techniques, which come in a diverse range of options and enable the Force to tackle a wide range of situations. In addition, the Force is also able to access support abilities that can boost and heal allies, making them invaluable to party play. Furthermore, they are one of two classes that have access to the powerful Fused Techniques, which expand their offensive capabilities even further than normally possible. Their Skill Tree promotes the use of Techniques and assistance in usage of Techniques, but lacks defensive support.

Reaching Level 75 on this class will give the following bonuses to the base stats of all classes and all characters of the same account:

A long-shafted weapon augmented for Technique casting. The Rod class of weapon possesses much higher

TEC than any of its Tech weapon counterparts and has extremely high PP recovery, but has poor melee range and damage to compensate. Techs cast with a Rod make the caster the Technique point of origin.

Talis are Technique casting weapons that can be thrown to manipulate the focal point of technique casting. Effectively, this can allow the player to cast techs from different positions without actually moving. However, Talises possess lower

TEC than Rods to balance their superior mobility and more accessible range. 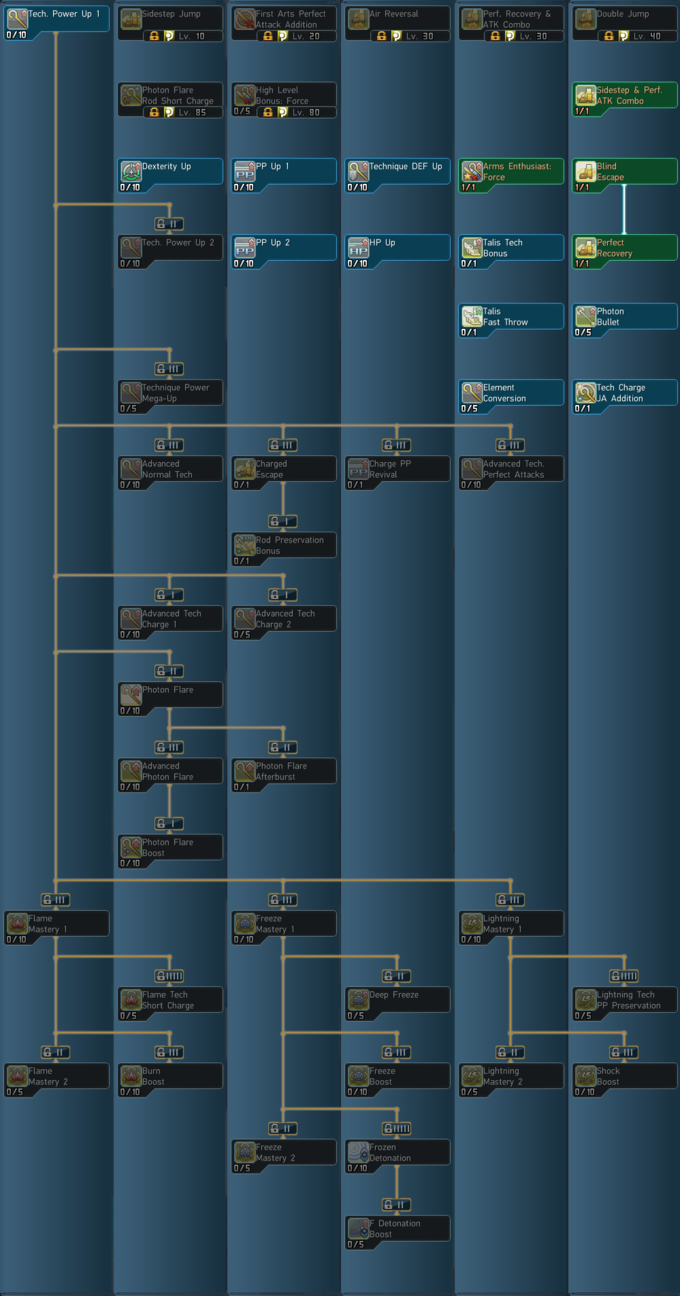 Further increases your base

Can stack with the other Tech. Power Ups.

Rod Skill. Main Class Only. Adds a Technique round when you perform Normal Attack with a Rod.

Main Class Only. Temporarily maintains charging when you perform a Dodge Action while charging a Technique.

Rod Skill. While a Rod is equipped, allows you to use a Technique maintained with Charged Escape without consuming PP.

Talis Skill. Grants a potency bonus to Techniques casted from a thrown Talis.

Main Class Only. Converts your weapon's Element Level into a Technique damage bonus. The combined bonus is maximized when the weapon and Technique Elements are aligned.

Recovers PP while a Technique is being charged.

Technique Power for 30 seconds after the end of a Photon Flare effect.

Boosts the chance of inflicting a status ailment when Photon Flare is activated.

Boosts the potency of Fire Techniques.

Boosts the chance of inflicting a Burn status ailment.

Boosts the potency of Ice Techniques.

Boosts resistance to the Freeze status ailment on enemies and makes it harder to undo with attacks.

Boosts the chance of inflicting a Freeze status ailment.

Boosts the potency and area of effect of Frozen Detonation.

Boosts the potency of Lightning Techniques.

Reduces the amount of PP consumed by Lightning Techniques

Boosts the chance of inflicting a Shock status ailment.