Wielding three types of weapons, the Hero (Hr) is a powerful Scion Class whose true power is being a master of all. With balanced growth in Melee, Ranged, and Tech, as well as the ability to quickly switch between weapons even during the heat of battle, the Hero controls the battlefield with masterful strength and skill.

Unlike other classes, Hero does not provide base stat bonuses when reaching Lv.75.

As a Scion Class, the Hero Class has several properties not shared by Normal Classes.

The Hero uses the

A heavy, powerful greatsword. Unlike the Hunter's Sword, the Hero wields its Sword in one hand, and is capable of strong, yet rapid attacks that quickly rack up damage. Hero's Sword is highly mobile, and has great single-target damage.

When used to activate Hero Time Finish, the user unleashes a flurry of advancing sword strikes, followed by an immensely powerful downwards slash.

The Sword's Weapon Action is Aura Blast. When the Weapon Action button is pressed, the user fires bullets of energy at a target. These bullets deal MEL Pwr damage and restore PP when they strike targets. Provided the proper Skills are acquired, this Weapon Action can be held to charge even stronger bullets that deal more damage and have a wider area of effect.

A twin pair of semi-automatic pistols. A balanced weapon, the Twin Machineguns are capable of both single-target attacks as well as crowd control. Unique to the Hero, the Twin Machineguns boast a strong normal attack that consumes PP to activate and can be held down indefinitely as long as the user still has PP remaining.

When used to activate Hero Time Finish, the user twirls their Twin Machineguns, then releases an annihilating burst of energy that vaporizes anything near the user.

A handheld device that creates cards capable of casting Techniques. Unlike the Force and Techter, the Hero is capable of using Photon Arts with the Talis, although they lose the ability to cast Techniques using the Talis' cards as an anchor point. Hero's Talis is a more support-oriented weapon, capable of debilitating enemies with attacks while staying out of the line of fire.

When used to activate Hero Time Finish, the user generates a field of energy that pulls enemies towards it before decimating everything within its area of effect with a storm of light. 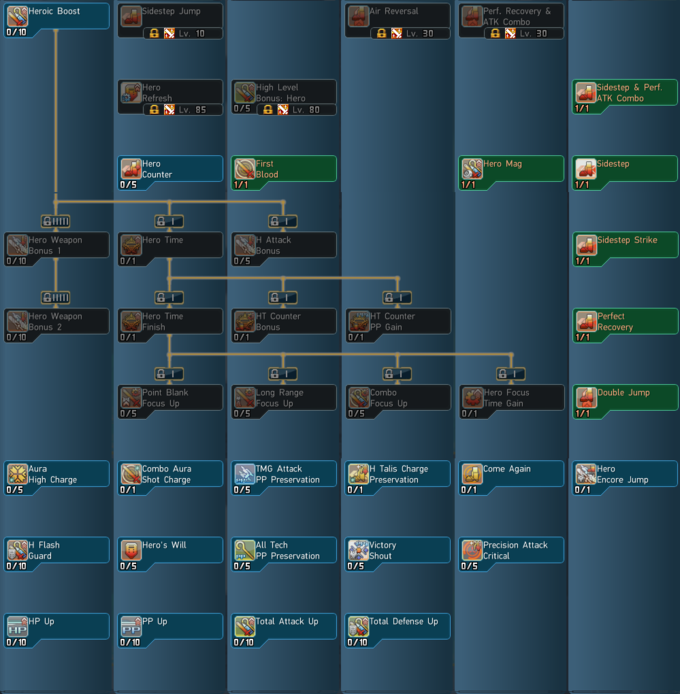 Increases your potency when a

Twin Machine Guns, or a

Increases the potency of Normal Attacks and Weapon Actions when a

Twin Machine Guns, or a

Reduces Spirit Bolt Charge time when you perform a Sword Weapon Action during a combo.

When a Talis is equipped, temporarily maintains a charge when you perform a Dodge action while a Weapon Action or Technique is charging.

Allows you to move to a marking shot up to two times.

Potency builds gradually over time. Potency decreases if you've taken damage equal to set % of your HP in a short time. Short Potency Burst is increased in Hero Time.

Active Skill. Focus can only be used when maxed out. Boosts total ATK according to number of times damage is dealt. You'll also learn Hero Focus when you learn this skill.

Allows you to perform a Hero Time Finish when you press the skill icon again during Hero Time.

Recovers your Focus Gauge when you successfully perform a Dodge during Hero Time.

Recovers PP when you successfully perform a Dodge during Hero Time.

Boosts the increment by which your Focus Gauge increases when you attack a nearby enemy.

Boosts the increment by which your Focus Gauge increases when you attack a faraway enemy.

Boosts the increment by which your Focus Gauge increases when you chain a Technique or Photon Art to a different Photon Art.

Gradually boosts your Hero Focus Gauge after you start a quest.

Adds a one-time chance of retaining 1 HP when you suffer damage that would have incapacitated you. Renders you invincible for short time when activated.

Reduces the amount of PP consumed by all Techniques.

Active Skill. Draws the enemy's attention to you for 30 seconds and recovers PP in proportion to the number of targets.

Increases the critical rate for attacks against enemy weak points and Techniques that exploit the enemy's Elemental Weakness.

Allows you to perform a second jump after stomping on an enemy using Double Jump while a Sword, Twin Machine Guns, or a Talis is equipped.

Recovers HP, PP, and Hero's Will by using half of your Focus Gauge. Also increases Heroic Boost for a set time and total ATK is boosted according to hit count.