Techter ("Te") class is a specialized Tech class that focuses on supporting allies and blending Tech and melee combat. Using their specialized weapon, the Wand, the Techter is able to approach the front lines of the battlefield and use Technique-augmented Melee attacks to cut down waves of foes all at once. Their Skill Tree boosts the capabilities of Support-type Techniques, as well as elemental attributes not covered by the Force class, making them incredibly viable as both a Main and Sub Class.

TEC. They also have good

MEL, as they are able to be used in melee combat, thanks to the

Techter's skills in their tree. Wands can be powered up with the Skill Wand Focus, which allows them to create Technique "explosions" when striking enemies with melee attacks that inflict additional damage and strike all enemies near the blast.

Talis are Technique casting weapons that can be thrown to manipulate the focal point of technique casting. Effectively, this can allow the player to cast techs from different positions without actually moving. However, Talises possess lower

TEC than Rods to balance their superior mobility and more accessible range. 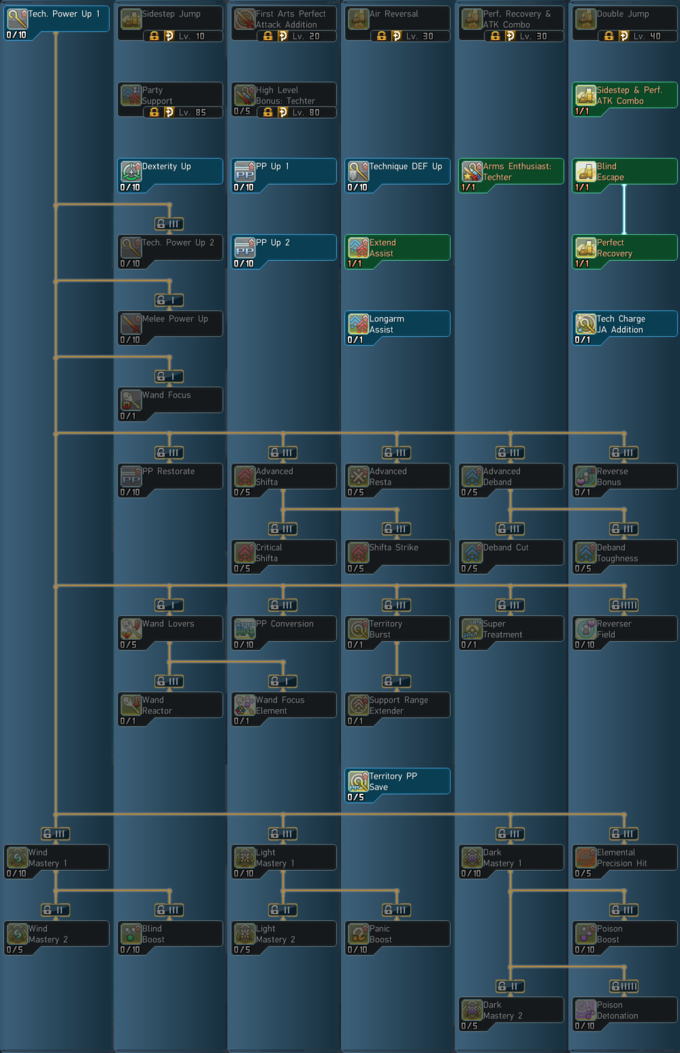 Wand Skill. Charges your Focus Gauge when you hit an enemy with a Charged Technique and activates Photonic Fury when you perform a Normal Attack.

Wand Skill. Active Skill. Grants a bonus to your Wand Focus, Normal Attack, and Photonic Fury potency, and enables fast Sidestep attacks. Only works if Wand Focus has been learned.

Wand Skill. Adds Melee Power based on a set percentage of the Technique Power of the equipped Wand.

Main Class Only. Increases the effect duration each time for Shifta and Deband.

Main Class Only. Increases the damage you deal to enemies while Shifta is in effect.

Main Class Only. Boosts your Max HP while Deband is in effect.

Active Skill. Main Class Only. Deploys a field that revives nearby allies.

Main Class Only. Boosts the area of effect of Resta, Anti, Shifta, and Deband.

Default Skill Extends the maximum effect duration of Shifta and Deband to 180 seconds.

Boosts the effect of Shifta

Boosts the chance of scoring a critical hit while Shifta is in effect.

Boosts the effect of Deband.

Reduces damage you take by a set percentage while Deband is in effect.

Boosts the effect of Resta.

Your own Shifta and Deband are applied to allies that have been revived.

Boosts the area of effect of support Techniques.

Reduces PP cost of support Techniques. Only works if Territory Burst has been learned.

When you heal from a status ailment, boosts automatic PP recovery for a set time and recovers your HP and your target's HP.

Boosts the potency of Wind Techniques.

Boosts the chance of inflicting a Blind status ailment.

Boosts the potency of Light Techniques.

Boosts the chance of inflicting a Panic status ailment.

Boosts the potency of Dark Techniques.

Boosts the chance of inflicting a Poison status ailment.

Active Skill. Blasts poisoned enemies, dealing major damage. Other enemies caught up in the blast may also be poisoned.

Main Class Only. When you use Shifta and Deband, their effect will cover all party members in the field.