Popple is a Pet usable by the Summoner class. An evolved version of the Pet Sally, Popple boasts even stronger offenses and stats than its unevolved counterpart, giving it enhanced control over the battlefield. Popple trades survivability in exchange for different attributes on their PAs. 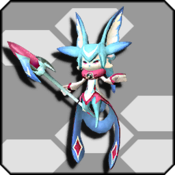