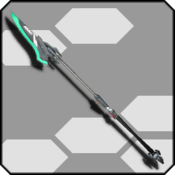 Partisans
Being one of the Hunter's other choice of weapons, it has generally modest attack power, but compensates with wider attack range and faster attack speed than Swords and Wired Lances, making them ideal for groups of enemies.

The Partisan's Focus Gauge can be accumulated up to 3 levels, and using a PA will consume 1 bar to enhance the attack range and power of the PA.
Since Focus accumulation can be done from flourishing or guarding, it can be easy to engage in battles with a full Focus Gauge. Their true worth lies in applying these strategies in certain situations in higher difficulty levels.

All of the Partisan's PAs have a flourish at the end of their ground activation. With Partisan Focus, Focus accumulates by 1 bar.
With Hunter Focus Boost, Focus accumulates by that multiplier.
All of the PAs, excluding Rave Drop will recover 30PP after the flourish. A flourish after a Normal Attack will recover 10PP.
This PP recovery is affected by natural PP recovery rate effects.