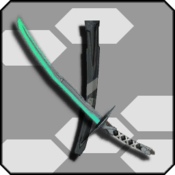 Katana
Being one of the Braver's choice of weapons, their charged PAs consist an unique mechanic called Perfect Charge. While charging the PA, a disk-shaped effect expands and closes in around the user. Before and after it turns red (about 0.5 to 0.6 seconds) is the noted timing, and when performed successfully, skills such as Basic Stance Charge will be applied in addition to increased power and more.

There are many PAs that attack in a wide range and PAs that attack at high speeds similarly to Twin Daggers and Knuckles.
Although there are PAs that are suitable for close and mid-range situations, there are no PAs that can easily attack enemies at long range.

As a side note, the PAs (both in EN and JP) have references to plants/flowers.

Flash of the Lotus