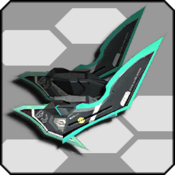 Jet Boots
Being one of the Bouncer's choice of weapons, it is the first weapon type that can utilize both Techniques and PAs in their unique actions.

Using the Weapon Action during PAs will activate an unique Variant Art + Technique.
The Technique casted by the Variant Art will continue even if the user changes weapons.

Techniques that are automatically activated by Variant Arts will not be activated unless the user has learned the relevant Technique.
The Technique casted is exactly the same, only the way to activate it is different, so the learned Level, DEX, Technique Customization is applied as usual.
In addition, if another PA is activated while the Variant Technique is being activated, that Technique will be interrupted.

All PAs have knockback resistance.
The PAs can be canceled by sidestepping, but the reception time is often late into their animations. On the other hand, various cancellations can be done early for Variant Arts.
Having the skill "Jet Boots Escape" will give the user invulnerability frames during Variant Arts.

Although not explained in the game, the power of the PAs (excluding Jetsweep Kick) increases according to the amount of Focus Gauge (Focus 1: 0%, Focus 2: 5%, Focus 3: 15%). Jetsweep Kick has a special magnification change.
The power of Techniques does not change.

As a side note, the PA names contains climate-related terms.