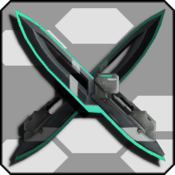 Twin Daggers
Being one of the Fighter's choice of weapons, its PAs are primarily based around aerial combat, useful for dealing with flying enemies and targeting out of reach weak points.


They have one of the highest performing tracking PAs out of all weapons, making it easy to target difficult to reach areas.
In compensation, they are highly Focus-dependent, making them less suitable for ground based combat, which explains the reason why the the Weapon Action "Spin" can only be canceled in the air.
One of their main features is having guard frames on all of the PAs except for Dark Scherzo, which makes them more suitable for boss fights.
Due to the short range of their attacks, they are not capable of dealing with groups of enemies. The only compensation to combat this is by Sarabande Shredder and etc with stun effects.
Juggle March has a stun effect, making it suitable for chaser damage skills.
In addition, all PAs immediately after usage except for Facet Folia, has the property of being able to switch to other weapon types with little or no loss of altitude.
As a side note, the PA names contains terms related to music.