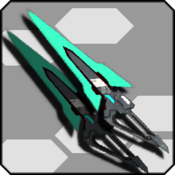 Soaring Blades
Being one of the Bouncer's choice of weapons, their PAs feature wave-like attacks mixed with photonic blades. By learning Soaring Blades Focus, photonic blades can be sent out with the Weapon Action, and Normal Attacks on a stabbed area will increase PP recovery and Focus recovery.

Although not explained in the game, the power of the PA increases and the effects change depending on the amount of Focus Gauge.
Most of the PAs involve multiple hits, so it is rather easy to accumulate Focus Gauge quickly.

In addition, many of the PAs move while attacking, making it easy to chase down moving targets and change attack positions by moving or changing altitude.
On the other hand, it is not good at attacking while staying in place with PAs only, and the damage dealt by one hit is low in most PAs.
Efficiently gaining Focus Gauge and PP while keeping Photon Blades intact after identifying key parts of the enemy will get the most mileage for Soaring Blades.

As a side note, the PA names contains terms related to birds.