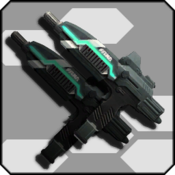 Twin Machine Guns
Being one of the Gunner's choice of weapons, many of its PAs are intended for short-range stand-alone attacks. Each of the PAs have a clear personality to them and some are easy to maintain altitude with, making them more versatile in the air rather than on the ground.


In addition, many of the PAs can be canceled by Stylish Roll in most timings, providing excellent evasion.
Many of the PAs have faster animation when activated in the air compared to on the ground.
Certain PAs can launch enemies as well.

All of the PAs allow the user to not be staggered during their animations, and will not be interrupted except for incapacitation, stun, or freeze.
This in turn offers airborne stability and prowess when dealing with Chain Finishers.
A few PAs offer guard frames too (but limited to strictly melee based PAs).

Regarding Melee Based PAs