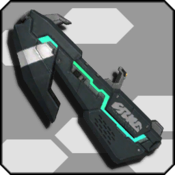 Launchers
Being one of the Ranger's choice of weapons, many of its PAs can deal damage in a single hit among ranged weapons, as well as having wide range and headshot capabilities. In compensation, they are rather slow for attacks and have somewhat longer ending lag, making it unsustainable for continuous attacks.

In addition, one of the PAs has the effect of forcibly knocking back some enemies that normally can't knocked back by.
Most of their PAs have slow projectile speeds, allowing quick enemies to easily dodge the attacks.

Half of their PAs are more effective at close range, pairing well with Eradication Bonus.
Since there is no decrease in power from Distance Decay, Launchers have the benefit of attacking from far away and more from Sharp Shooter.

Compared to the Rifle, Launchers do not have any PAs that can evade easily or have guard frames, and few PAs having Super Armor.
Although less effective in multiplayer Boss situations, they offer great versatility against multiple targets.