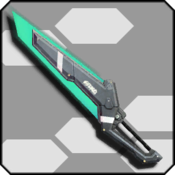 Sword
Being one of the Hunter's initial weapons of equipment, its strong attacks are generally limited to its PAs. It can be relatively easy to get accustomed with the Sword.

The capabilities of the PAs vary greatly depending on the Focus Gauge of the Sword. It is recommended to accumulate and maintain Focus as much as possible during battle.
Its overall performance, such as the instantaneous damage and attack range, tends to be modest.
To compensate for this, the PAs have Super Armor, which allows unflinching when being attacked, and additional effects such as ignoring Stun based effects.
The number of Charge PAs makes it a good choice for the Hunter's skill, Charged Parry, providing excellent defensive capabilities overall.
The Sword can be easy to use, but can be more effective when used properly.
Most of the PAs boast high average power, making it somewhat easy to deal with lots of enemies, but only a few of them have a fast initiating attack, and many with narrow attack range. Take in consideration of the properties of every PA to utilize them effectively in higher difficulties.
Most of the Sword's PAs can be canceled early by guarding (except for some PAs such as Cross Cut).