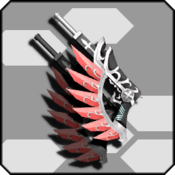 PP is consumed from Normal Attacks, and natural PP recovery stops when unsheathed.

The Weapon Action is "Reload". Continuously recover PP while pressing and holding down the button.