Twisted with Hatred is an Urgent Quest.

This is the final battle with the Primordial Darkness to put an end to this eternal war. The fate of the universe rests on it. This will be your most difficult battle yet. We pray for your victory.

This quest can be completed 1 time(s).
You will fail this quest if:
You retire after becoming incapacitated.
All party members become incapacitated.
The time limit expires.

Mostly identical to the normal variation of the fight from The Face of The Abyss, with the following changes:

Elementless Sodam is the third version of the Sodam phase encountered, and grows white and black crystalline like wings. In this phase, Sodam has no weapon nor elemental weakness.

Sodam gains new attacks as well as stronger augmented versions of its ordinary attacks in this phase. Most of the attacks are avoided by constantly moving. 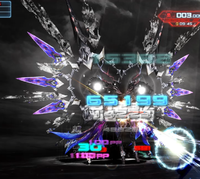 Theoretical Requirements based on a Clear Video

The following items can drop at the end of the Quest from breaking the crystal.