This page outlines what can be found at each location on Planet Halpha.

This section has a list of all regions on planet Halpha, and the sectors within them. Below each sector name is details about them.

The largest city on planet Halpha. This is the location you appear at when signing in, and when you return to after completing an Urgent Quest.

These are the fields found right outside of Central City's walls. With a temperate climate and easy-to-navigate terrain, this is the perfect place for new ARKS recruits to train their skills.

A sector that makes up the western border of Aelio. Aelio Town can be found here as well as steep cliffs and beaches.

A lake area where enemies normally do not appear during the day.

The wetlands found in this region feature a derelict facility built on top of them. Further north is Altolani Plateau, where it is said a special DOLL occasionally appears.

A region well-known for its waterfalls. A coastline can also be found to the south, as well as as a mountain named Mt. Piccolt to the south-east.

Mt. Magnus is a tall mountain found to the east of Central City. Updrafters can be found scattered throughout allowing you to easily traverse the terrain.

The Vanford Laboratory Ruins are the remains of a Laboratory attacked by DOLLS. The once tall walls have been torn down by past battles.

Defeat the Dromes found throughout this sector to convert them to your side. Once on your side, they will attack nearby enemies.

Resol Forest is a forest that changes its appearance at night. It is a dangerous combat sector, with powerful enemies confirmed to appear. As such, a high Power Level is required to enter. 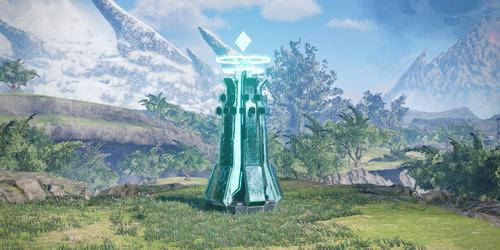 Ryuker Devices, represented on the World Map as green icons (

), can be used for several purposes, including changing Blocks, accessing your Storage remotely, creating Quick Food, and moving to different Rooms.
Ryuker Devices can also be used for quick travel via teleportation. By interacting with a Ryuker Device, or by opening your World Map, you can teleport to any other known Ryuker Device. Highlight the icon for the Ryuker Device you want to teleport to, then hold the confirm button down for a few seconds to start the teleport. 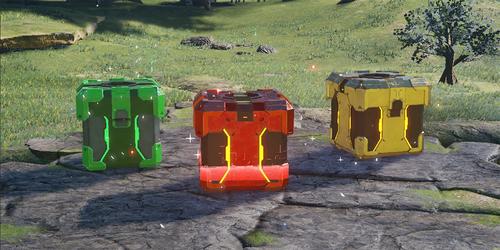 Red Containers can contain either

The number of red containers that appear per account is limited. In addition, some barriers are created around the Red Container and the container cannot be destroyed without destroying the devices that are creating the barrier.

For a list of all Red Containers and collectables, please visit this page.

Region Mags are facilities that looks like an enormous Mag.

Putting gathering materials inside of it can grant a boost effect that other ARKS members can share.