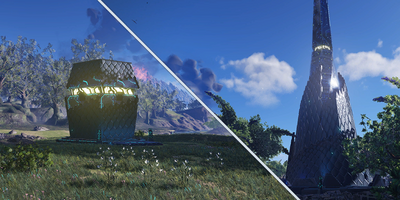 Cocoons and Towers are mysterious structures found in the fields of Planet Halpha. Contained within them are enclosed, instanced Cocoon Quests and Tower Quests, which teaches you on various movement and combat techniques, and provides rewards upon completion.

Players can currently earn up to 30 skill points, with

When interacting with the door to a Cocoon or Tower, you are shown various details about the Cocoon/Tower Quest within which are detailed below. You are also shown party settings that you can use to restrict access to your own party.

On your World Map, Cocoons are represented as pink "barrel-like" icons (

), and Towers are represented as pink tower icons (

). Selecting the icon for a Cocoon or Tower also allows you to view the details of the Cocoon/Tower Quest and if conditions are correct, you can start the Cocoon Quest from the World Map.

This cocoon tasks you with completing a training course. Using movement techniques and your weapon, you must destroy targets, collect Point Cubes and traverse the terrain with your Photon Dash and Photon Glide.
At the end of the course, you use your Photon Blast to destroy a target. After doing this, the Finish Line is unlocked.

This Cocoon asks you to defeat a lone Pedas Sword. On the back of its neck is a yellow core that reduces damage taken by the Pedas Sword. Once the core is broken, the shield is removed.

This Cocoon contains a platforming challenge consisting of platforms suspended over a bottomless void. By Photon Dashing, you can extend the reach of your jumps.

The layout of the Runaway Cocoon is as follows:

The layout of the DOLLS Burrow Tower is as follows: