In New Genesis, ARKS ID acts as an ID card which displays your player profile. The ARKS ID displays basic information such as their Player ID Name, their Player ID Number, their Xbox Live Gamertag, their Recently Played Character, their comment window, and their selected Symbol Art / Stamp. The visibility of the ARKS Card can be toggled to be visible to the All Players, Friends Only, Alliance Members Only, Friends and Alliance Members, or Private. 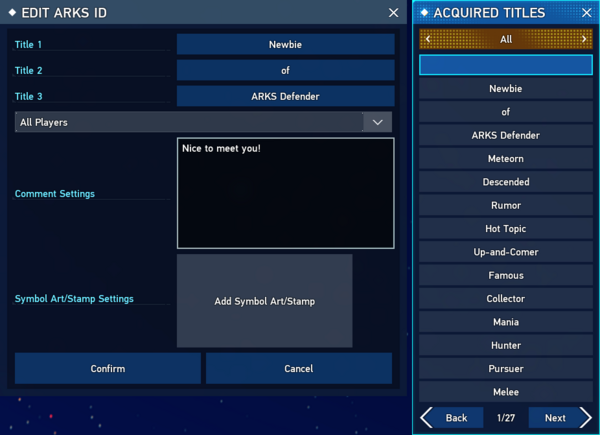 Editing the ARKS ID will allow you to select up to 3 obtained Titles to be shown on the top of the window, as well as visibility options, comment space, and selecting a Symbol Art or Stamp to display.

Backdrops act as the background that appear behind your rendered character's snapshot. Additional Backdrops can be unlocked after obtaining a certain amount of Title Points, which are earned from obtaining Titles.